skip to main | skip to sidebar

Chris talked about how to make a documentary. It is very simple! You need to have clear and keep in mind two basic questions: What is the story? And, Why do you want to tell it? - Then, some tips about how to set about making it and what you need to know and think and do were also given. The prezi presentation is available here 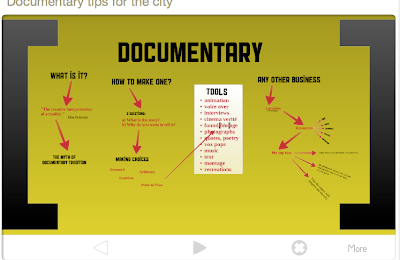 We also watched some films: "The breadmakers", and Alive ; and a beautiful documentary over Liverpool by Terence Davies: Of time and the city. And then all of Annie Hall.
Posted by Taina Rajanti at 13:23 No comments:

We learned first that the enchanting wooden quarter at the hinges of the centre of Pori is not called "Kuukkari" by it's inhabitants, but plain 6.th quarter (6. kaupunginosa). It has been studied by Pisara-project , and an inventory of the buildings has been made. There is also a final thesis work by Harri Joensuu about documentary photographs of residents from Kuukkari 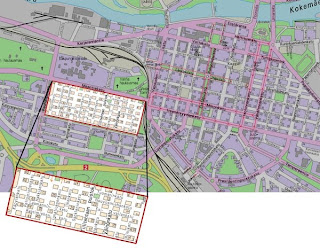 We then watched Risto Jarva's documentary "Kaupungissa on tulevaisuus" (The city is the future): see article about it (in Finnish)


Finally we went through Italo Calvino's "Six memo's for the next millenium", especially "Visibility": "Where do images come from?" - do they "rain from above", godsent? Every story springs from one image, which is full of meanings and creates others, forming a field of analogies, contradictions, associations etc. A field that is not merely visible, but conceptual; leading to the conceptual development of a story. The mind of a poet, and a scientist at some point starts to work through images: this is the fastest way of combining and choosing something out of the infinite forms of possible and impossible. Imagination is some kind of electronic machine.


"Imagination is the repository of possibilities and assumptions, containing both that which has never been, and that which will never bee, but might have been."
Posted by Taina Rajanti at 13:03 No comments:

Let me tell you a story.

A long long time ago in the days of King Adara the realm met with mortal peril. Then the King sought the rabbi Malachi and asked for his help. Rabbi Malachi went to the secret place in the forest, performed the secret rite and spoke the secret words, and thus the peril was averted.

Time passed, and in the days of King Lev a peril threatened the realm again. The king sent for rabbi Bracha and asked for his help. "We have forgotten the place, but we still know the rite and the words; that will have to be enough", said the rabbi; and it was.

Time passed again, and in the days of King Chaim there was another peril. Rabbi Kelila said: "We have forgotten the place, and we do not know the rite, but we still remember the words; that will have to be enough". And it was.

And time passed, and King Isaiah had to send for rabbi Hadar to avert a mortal peril. Then said rabbi Hadar: " We have forgotten the place, we do not know the rite, and we do not remember the words. But we can still tell the story, that will have to be enough!". And, it was.

Storytelling is a basic human function, a way of creating community, of sharing and transmitting experience, of giving meaning to the world and its happenings. It is a powerful way of molding the world.

We also went through some basic points in Walter Benjamin's Storyteller. 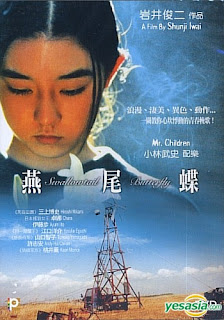 And then watched Shunji Iwai's Swallowtail_Butterfly, where the global metropolis is the wind in the sails of the story: "Once upon a time, when the yen was the most powerful force in the world, the city overflowed with immigrants, like a gold rush boom town. They came in search of yen, snatching up yen. And the immigrants called the city Yentown. But the Japanese hated that name. So they referred to those yen thieves as Yentowns. It's a bit puzzling, but "Yentown" meant both the city and the outcasts. If they worked hard, earned a pocketful of yen, and returned home, they were rich men. It sounds like a fairy tale, but it was a paradise of yen, "Yentown". And this is the story of Yentowns in Yentown."
Posted by Taina Rajanti at 06:12 No comments:

Michel Serres (Rome, a book of Foundations): "This is not about ordinary writing of history. This is about being able to see community to take form." 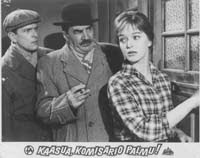 1. The city is the place of man.
The city is not a specific place where man (human being) dwells, it is the form in which man exists in the world. Human beings do not exist in the abstract, but always in some concrete form. And in a form that is both material and symbolic, at the same time. Man builds because he dwells - because his relation to the world is such that it contains dwelling.

People make the city: place, space, dwelling is made and constructed, not something existing independently of human beings. Dwelling is a skill that has to be learned, like a language. Learning and dwelling itself takes time, happens over time (creates time) - there is no instant dwelling. It is something shared, not solitary.

Dwelling happens in the movement of departure and return. It is in motion, agitated - the place is kept by keeping it in motion. The movement creates differences in the world, between here - there; near - far; familiar - strange; culture - nature; us - them ... etc. Dwelling creates directions and meaning, forms a cosmography.

2. The city contains strangers
"Cities are, by definition, full of strangers" - and one has to learn how to get along with them. Jane Jacobs, the Rise and Death of Great American cities.

Cities are not made of people who are all the same, like a family. Strangeness is not a property of somebody or a thing, it is a social relation. At its densest this strangeness manifests itself in the urban crowds, the anonymous masses.

Masses are an age-old problem of governance, politics, democracy. They are the plurality of cities, the stuff that urban texture is made of. Baudelaire's poem:

Amid the deafening traffic of the town,
Tall, slender, in deep mourning, with majesty,
A woman passed, raising, with dignity
In her poised hand, the flounces of her gown;

Graceful, noble, with a statue's form.
And I drank, trembling as a madman thrills,
From her eyes, ashen sky where brooded storm,
The softness that fascinates, the pleasure that kills.

A flash . . . then night!--O lovely fugitive,
I am suddenly reborn from your swift glance;
Shall I never see you till eternity?

Somewhere, far off! Too late! never, perchance!
Neither knows where the other goes or lives;
We might have loved, and you knew this might be!

Says Benjamin: "..the crowd is nowhere named in either word or phrase. And yet the whole happening hinges on it, just as the progress of a sailing-boat depends on the wind." Some Motifs in Baudelaire/ Silmä väkijoukossa. - Here is maybe the corner-stone of the course: not so much looking at narratives and stories about cities, as looking at narratives and stories which are irrevocably set in urban context.


3. Metropolis
The metropolis is the city that has overflowed all it's borders. It has no one centre and no definite form or circumference. More than an interface, it is a platform.

The metropolis is to the knowledge worker what the factory was to the industrial labor. It is both the space of production and consumption.

And we watched all of Matti Kassila's Kaasua, komisaario Palmu - where 1950ies Helsinki is the wind in the sails of the story. (Link is not to the film or excerpt, but an article about the film).
Posted by Taina Rajanti at 05:10 No comments: 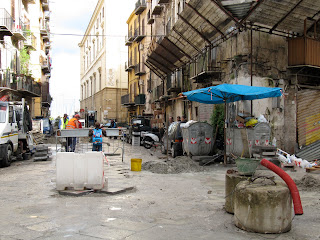 Hello everybody!
Below the course program. The course is divided into two parts: first we'll discuss "the city in media", and concentrate especially on the city appearing in films and documentaries. The second part will be about the "media in the city" - ubiquitous media, media that surrounds us, media applications about and in the city.
The course is an intensive one. Lectures will be in the mornings 10 - 12; the afternoons are meant for working on the exercises and ideas. First exercise would be to see films about the city, films narrating the/a city. Taina will be bringing some examples - but if anyone has a favorite and good arguments for it, by all means bring it along!
The course is meant to consist basically of work you can do during the course itself. The course assignment can be a variety of things: you can write an essay - do a video/documentary - make a demo or some other form of presentation on some of the themes we touch upon. You can do the assignment alone or in a team. The last meeting is scheduled for 16.3, but depending on the kind of tasks you choose, we can stretch that.
Week 1 (week 8): The city in media
22.2 Intro to the course. What is a city? Some films about cities. Taina speaking - she also has some films, but if you have a favorite do bring it too!
23.2. Narration. What is a narrative? How does one study narration? Taina speaking. I think we could choose one or two films and study the narration.
24.2 Kuukkari. Eeva Karhunen will tell about Kuukkari and studies that have been made of it. Afterwards we can do a walk in Kuukkari.
25.2. Documentary day: Chris will tell about how one could be made. We can do an exercise in planning a documentary on Kuukkari.
Week 2 (week 10): Media in the city
10.3 10 - 12 Taina will talk about Wormholes, i.e. hybrid urban and cultural space. We'll make an exercise about those: keeping a wormhole diary/ tracking media in urban space
14 - 16  Joanna Saad-Sulonen will speak about ubiquiteous media and tell of media applications and research and artistic projects in city.
11.3 Wormholediaries, results. Discuss plans for course assignments e.g.: plan/ short execution of a documentary on the city; plan for/ a demo about visualization of wormholes. An essay on city and narration or city and media is also an option.
Final meet:
16.3 is a date scheduled in advance. Depending on what people want to do and how much time they need, we can discuss a further date in April.
Posted by Taina Rajanti at 22:41 No comments: